Over two months ago, I set out to create means for spellcasters to invoke spells and improvised bursts of magic known as arcs in the Optional System. Hence the Spell option was born. In this version of magic, casters summon/introduce/create unique effects through a series of ritualistic incantations completed within a short period of time. To explain it mechanically, you need to successfully roll a certain number of Spell options in a row to cast a spell.

While these options are currently undergoing playtesting (in fact, we're testing it out tomorrow), something bothered me about the Spell option. Not the Spell option itself, but casters in general. Was I creating a magic system similar to others in which magicians/wizards/priests had more than half of a sourcebook dedicated to them while fighters/warriors/rangers just needed to know the name of their weapon? Was I creating an unfair bias against non-casters? 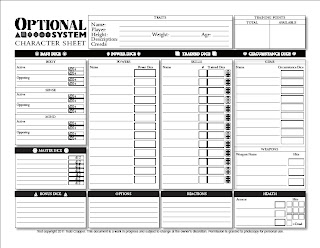 While it may only be the 2nd Optional System character sheet posted here, it's the 7th version of the ongoing process. With room for gear and bonus dice, plus revisions for armour and weapons, Version 7 of the OS Sheet is ready for you!

A lot of people don't know this but I'm a film school dropout. One year at Humber College in Toronto and a large majority of it was theoretical, not practical. We learned what all the equipment is for, what is does, and how it does it but those suckers were smudge free as far as first year students went. Since those days, my interest in filmmaking remains though I keep it to a casual hobby rather than striving to break into the movies.

I've been using movies in my games for near on 5 years, right around the time I purchased my iBook G4 laptop and it came with the free version of iMovie. Actually, I was doing it for a year or two before that with whatever "program" I had on my PC. Opening credits, title sequences, scrolling text, and flashes of artwork set to music. They've been an incredibly effective way to setting the mood and getting players right back into the action without the bore of reading text aloud. With the Optional System, I'm looking to take this a bit further and turn these sequences into an aspect of the game.

Say Hello to the Bad Guy!

And I had to use that mixture of Scarface quotes. I had to! It was too perfect.

Usually on Mondays, I like to post the latest update to Optional: Playtest but there wasn't enough work put in last week to have anything significant for you. Lots of thinking, not a lot of writing. Instead, let's concentrate on that most crucial of challenges for any OS adventure: bad guys.

I've been playing around with some bad guys - various monsters, particularly orks - for the last few playtests and now the time has come to pull out a hammer and use the good nails on these suckers. While the formatting may be nothing to hand out awards for, it does the trick for what's required right now. (1 training point to whoever can guess which program I used to draft him up. Then lose 1 training point for being so cocky about it.)