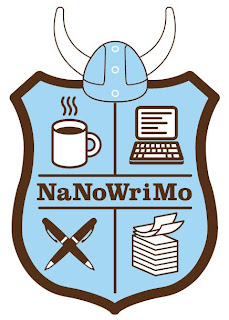 As of last night, I'm hovering close to 600 words short of the expected word count after six days of this year's NaNoWriMo. Considering I was behind by 3000 when I finally sat down and got cracking, it's not as bad as it could have been and it's also not as good as it should be.

What's slowing me down? It's not lack of effort, I'll tell you that. It's chapters. I've finished two chapters of the novel now, including the end of the second chapter last night, and I shut down as soon as the word processor added a page break. What's up with that? My mind was willing and able to think about any other project or topic, yet shuts down when it came to this novel. It's an identical reaction when I'm reading a book - I stop at the end of a chapter and set the book down. Could that have spilled into my writing?

It goes without saying that novel writing is remarkably different than game design (for me, at least). In game design, I bounce around back and forth until there's enough to assemble a chapter and then's it's a couple of hours of cutting and pasting. Not with a novel. That sucker's got to be written in paginating order (which also happens to be chronological order). To put it another way, novels were intended for use on typewriters and games written on computers.

Mind you, there have only been two chapters to date, so it's not like I have a chronic problem. And each chapter is larger than I normally write, so working on this material from a word count point of view has been incredibly helpful. Any previous efforts at fiction saw them consistently broken up into small chapters or text breaks as I jumped from scene to scene as if I was cutting a movie. Or perhaps it's because of the world I'm working in, a strange and far off-course from standard fantasy (IMO) that words are spent explaining details the citizens of this world would normally glaze over. It's like finding yourself trying to explain how fire works to a child and junior ain't swallowing "Just because."

Either I find a way to overcome this chapter hurdle or make a point of having every chapter end in an increment of 1667 words. Oh, and before the middle of this month or else I risk being further behind than I am right now. If things keep up (or stay down, as it were) at this rate, I'll be 3,000 words off from the final goal at month's end.
Posted by Unknown @ 13:16 No comments: Links to this post

Well into the fifth day of this writing marathon and I still haven't been able to start today's word tally. Mondays were always going to be tricky because of my weekly slate for this first day of the work week (I like to keep my personal life somewhat similar to a real workplace so that I can dread Mondays as well as everyone else). In between checklists, I took a few minutes to talk about Messenger's progress to date, the completion of the first chapter, and how the plot didn't come about until today.

Posted by Unknown @ 18:26 No comments: Links to this post 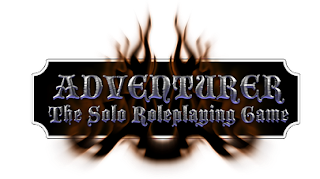 On Friday, I announced my involvement in a new gamebook for the upcoming solo RPG, Adventurer. Now that it's Monday, it's time to start figuring out how the hell I'm going to write this sum bitch.

A friend and frequent playtester of mine, Brandon Neff, emailed some tips and tricks he used for a similar project of his (SoloQuest published by Kenzer & Co.). His recommendations came in three parts, each as important as the last and suited to a dungeon crawl style gamebook.

Step 1: Build a map first, randomly numbering each room, intersection, and corridor.
Step 2: Take each number from your map and assign them a single line on a notebook, followed by connecting numbers that room/intersection/corridor came from or heads toward. For example, line 48 could read as 48 - 3 - 56 - 112.
Step 3: Start writing out each numbered section, pacing yourself out in a particular direction for six or seven choices at a time before winding back and picking up where you left off so as not to get too far ahead.

As I mentioned above, this process was intended for dungeon crawling gamebooks and the biggest issue with mine is that it's an outdoor, story-based sandbox gamebook. Considering Brandon's more experienced than me at the process, I'm not really in any position to be finicky, so I'll use what's been offered in generosity and figure out how best to use it.

Let's take a look at each of the three steps and re-analize them, shall we?