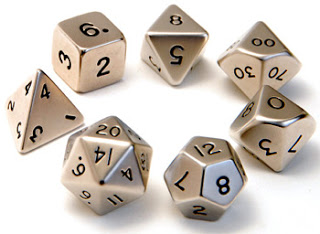 Allow me to think out loud for a moment.

While looking over the latest draft for ScreenPlay... What's that? You haven't seen a copy of the latest draft, version 1.03? Well, why don't you download it right from here then. Anyways, looking over the draft, I was trying to consider recharges for Stamina and one of the considerations was for a cast member to gain +1 Stamina whenever a Writer rolled the highest value on a die.

Then it hit me. It would become easier to gain Stamina if you're rolling lower dice. You have a 1-in-6 chance of gaining a point of Stamina back with a d6 versus the 1-in-12 chance with a d12. This is the opposite intention of dice where higher values indicate more power and ability. If I'm going to keep with this theme, recharging should occur faster for those with higher values (or step, if we're going to keep up with the game vernacular.)

This is not the first time such a thought has occurred when it comes to exploding dice, though I cannot think of which game(s) it was for the life of me. Must be the fact that I write before I've barely had two or three sips of coffee. Savage Worlds does seem the likeliest suspect as that one's the signature game when it comes to exploding dice and the concept of rewarding die maximization (wow, doesn't that sound fancy?) commonly seems paired with step-based die applications (an even fancier term). You want the higher die value to increase your chances of success, yet there is a little risky luck in using lower values. d6s can explode with great frequency, as I discovered during my work on Killshot but that game had the maxing vs. stepping problem handled (in my opinion).

All die values were based on how the die was applied to the roll, not based on its strength. So all base attributes were assigned d12s, equipment and exterior circumstances (i.e. cover) used d10s, applying trained options gave d8s, specific skills garnered d6s, and players were rewarded with d4 bonus dice to apply to a single roll during the game. Skills and bonus dice were the exploding masters and they made sense, plus they were also limited in their frequency. Whenever you used a bonus die on a roll, that die was gone for good and you had to earn another one (typically by killing someone who deserved it) while skills were a one-shot deal in a scene and you couldn't apply those dice again until the next one. So the higher chance of a die exploding, the more limited of a resource it became. That left the higher values, particularly the d12s, a permanent resident in a character's dice pool because the odds of them exploding were acceptable.

Now there's an argument to be made for the value of exploding probability in a game like Savage Worlds - it allows weaker characters an opportunity to keep up with the demands of the game. Yet it also backfires in a game like Savage Worlds where the standard target number is 4, a very reachable number for a d6. Once you add explosions into the mix, there's a harsh effect on a d6's range.

Balance that off with the ultimate benefit of exploding dice: the thrill of the roll. Roleplaying games are about chance and that's where a lot of the excitement comes into play, the same way people get excited playing the odds at a casino. It's not that they have a poor chance of walking away with more money, it's the excitement and rush you get when you do win. It's about how we get to that moment by playing the game that makes the experience memorable as a whole but it's figurative roll of the dice to see if we beat the spread that creates the buzz, the thrill, and the lure. In everyone's own unique way, players get excited when they see the highest value on the die and that's why many games incorporate a reward for doing so (critical hits on a natural 20, for example).

And so we return to the crux of today's topic. While mechanically flawed and a somewhat polar opposite to how the rest of the game works, should I apply a reward system for die maximization in ScreenPlay? Perhaps, but not like this. There may be another way.


Oh, I'm sorry. That's all I have on this one. There's no revelation going on and I don't have the foggiest idea of what else I could try. That's a wrap for today, kids.
Posted by Unknown @ 09:48 No comments: