On Friday night, the Development Team got down to business and we started up Act One of High Plains Samurai, our playtest campaign for Optional Core. Quick summary? It was excellent right up until the end when the players cashed in all their qi to defeat 2 villains in one fell swoop. While I'm sure it felt awesome for the players, it demonstrated a major flaw in combat design.

There's plenty more to talk about, but first let's get started with some videos. You can catch the first four hours of our exploits (and now we know there is a four-hour time limit on all Hangout broadcasts) here on YouTube.

And for a clearer version of the HPS intro movie...


Ironically enough, the majority of problems happened after the broadcast cut out. The fight between Spider (a wanted fugitive sought out by Fraser's hero, Maoser) and Black Scorpion/Kiki were drastically different. While there's still loads of review and recapping ahead before I can create a concrete list of revisions and new material for next month's game, here's what I have so far.

Every Dragon Ever Made 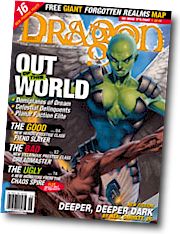 Just popped onto the laptop this morning to post links and comments for last night's High Plains Samurai and wanted to share something sweet with you. And by sweet, I mean the clinically awesome definition of sweet.

An online archive of every single printed issue of Dragon Magazine is now available through the Internet Archive. This was actually brought to light on EN World a couple of days ago and there's still some uncertainty about its authenticity and if they actually have legal permission for this, but it remains sweet for as long as it lasts. Every issue. Dude!

The sweetest part of all this sweetness is that I finally have a PDF of issue 287 and my one and only Dragon submission: When Celestial Attacks.

This morning is spent hanging out in a McDonalds in Ottawa, of all places, while I'm waiting for the missus to write her admission exams for a (fingers crossed) spring college course. Laptop in hand, riding off the free wifi, and loving how things are so different for adults hanging out in public places than with teenagers.

After producing an intro trailer for High Plains Samurai and revisions to the Optional System character record, it's time to nail down some of the new rules and concepts for Friday's first foray into this mini-campaign/playtest. And it's become entirely clear how different a martial arts campaign is from Killshot.

Don't get me wrong, it's still the Optional System in every way, but there are some distinct differences between one and the other. Would you like to see a list? Some of these are direct quotes from the original documents I'm working on this morning.

Ever since my early days plugging away on the Optional System, I've been unable to come up with any effective and reasonable mechanic for simulating slow motion in an action game. At first, it was intended solely as a cinematic effect capable of allowing heroes to increase their odds of success at a limited rate (once per series) or as a means to provide perfect accuracy and completion at a limited rate (once per scene). Nothing stuck and it took a back burner to proceed with the more realistic and less cinematic Killshot.

With High Plains Samurai starting up on Friday and Optional Core playtesting well under way, it's time to take another look.

So... uh, yeah. How about that slow motion mechanic, eh?

That's just the problem - I'm still drawing blanks. Not to come up with any solution, but an appropriate one that doesn't reek of a stick-on mechanic. For example, having it work as an extension to a stunt where you gain +2d10 on a single stunt roll or perform a stunt with decreased difficulty seems to cheapen the impact I want from slow motion mechanics. Plus it comes across as a stunt. Even providing stunts as an opportunity to perform cinematic slow motion in games just seems like a tacked idea.