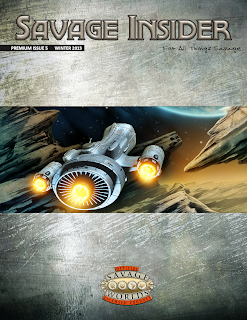 Released today by Mystical Throne Entertainment (the same people behind our current Twilight Continuum Kickstarter project... hint!), Savage Insider Premium #5 contains my first published Savage Worlds article detailing a new alien race known as the lokka. Secretive and paranoid shape changers, they have been cast out to the fringes of society and know a life only of subterfuge and infiltration, existing as a refuge within any of the countless other races in your campaign. If you're like me and can never choose one race in particular as your favourite, this shapeshifting option may be just what you're looking for. Just look for the Racial Profiling article.

Or you could also pick up a copy for the other articles too. I'm sure they're just as good, if not better. There's a POD copy coming out soon and I just may treat myself and clear some extra space on the shelf.

On sale through RPGNow.
Posted by Unknown @ 14:41 No comments: Links to this post

A Big Day For Reloaded

I am the Warden and today is the day that Killshot: Reloaded truly begins!!

Oh, I know I've been talking about it for months and work has begun on the four individual themes originally intended as the sole purpose for Reloaded, but things have taken a turn for the better. During the month I shall now refer to as Dark February - a time when I had to put various projects and other game design related activities aside to deal with the harshness of Reality - a realization occurred. Something deep and profound that has breathed new life into this project.

Killshot: Reloaded will not simply exist as a supplement supporting Killshot. It will be the second edition of Killshot, complete with additional themes and settings to create a fully-detailed, fleshed-out campaign setting.

In the past year since Killshot's Kickstarter brought this game to life, I have run a lot of games. In that time, I have tried a lot of new options and material, particularly for the recent Optional Core playtests and we've devised a few new tricks and shortcuts previously unconsidered or unavailable. That's not to say it's broken as is, but it's dawned on me how this game could be even better.

At this point, I wouldn't go so far as to call this an official announcement or anything. Just a little secret between you and me. The plans for Reloaded have just exploded and it's going to take me the rest of the month to truly understand what's swirling around in my head and run with it. All of these ideas will be incorporated into a complete Kickstarter campaign bigger and better than what was offered last year and if everything goes amazingly to plan, you could be looking at a 300+ page guidebook for the next edition of the world's deadliest tabletop roleplaying game.
Posted by Unknown @ 08:46 No comments: Links to this post