The word "independence" has a lot of meaning right now. It's something I've been struggling to regain for the past couple of years and it's really been coming through in my work.

Since Killshot went live (just over 48 hours ago), I've sold 8 copies of The Director's Cut. For me, that's a stupendous increase from what I used to get publishing 3pp supplements for D&D - 1 per day. Tops.

It's not so much that I'm surprised by this upswing so much as relieved. During my research over the last year, I've noticed the shift in PDF sales from third-party material taking some of the top spots to more independent/original systems. I think the download market is best suited to independent systems and publishers. For me, these sales are proof.

The ironic effect to it all is that nagging feeling I've "wasted" so many years publishing material for other systems that have gone unappreciated. Perhaps the glass was half empty, yes, but my previous experience put the water in the glass. Without the experience of putting a PDF together, assembling Killshot would have been a nightmare and the end result would be far inferior to what's in place now. Not the least of which is the game's mechanics.

When I was putting the finishing touches on the assorted Killshot PDFs, I recognized how much influence D&D had on design and presentation. Casually flipping through, it looks very much like a traditional purchase option game where your character's abilities are measured only in your choices made during character creation. That's very D&D and I guess it's no surprise to see it there.

Yet as an independent game, I could break away from some of the taboos originally holding me back and create a game where character options are a strength, not a definition.

So we're all in agreement then? Without the previous work with Emerald Press, none of this would have come to pass. You just have to starve to appreciate a good meal.
Posted by Unknown @ 14:27 2 comments:

Killshot & The End of the Beginning 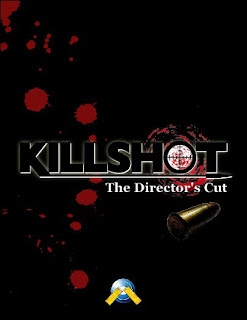 It is with great pleasure I can finally announce we have a Killshot. The Director's Cut is now available on all OneBookShelf sites for $8 (American). For more information, check out the Broken Ruler Games site for links on where you can get yours plus some free goodies to make the decision a lot easier.

Twenty months. That's the amount of time I spent working on this project. While it's not the longest amount of time I've spent on a project, it is by far the largest and most dedicated I've ever been on anything ever in my life. I don't think there's much more to say which hasn't been said over countless posts before and the time has come to let the book do the talking.

The conclusion of it all comes at a strange time. While my make-believe life is starting to pick up and things are moving along ahead of schedule, my real life is starting to close in around me as the 2-year mark of the accident arrives and it's time to start going through the assessments to see what the long term effects are before someone else sitting behind a desk decides what to do with me. Despite whatever you hear or read over the coming months, my commitment is to make my work in game design, Broken Ruler Games, Killshot, the Optional System, and all that my future. Because it's my choice.

And that's something no one can take away from me.

I hope you enjoy and thanks for taking the ride with me thus far. Now let's gas the car up and hit the road, we've got more highway to travel!!
Posted by Unknown @ 13:20 No comments: