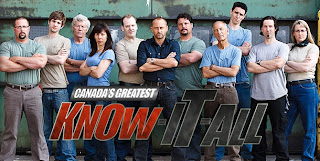 Bear with me for I'm breaking away from my norm today to wag my finger at Canadian TV producers. And since it involves the Discovery Channel and highly intelligent people, it shouldn't be too much of a stretch.

Last night, I caught the season finale of Canada's Greatest Know-It-All on the Discovery Channel. This is also the only episode of CGKIA (??) I've ever seen, but my fiancee has kept up on the show enough to explain any missing details. For those of you unfamiliar or outside of the Great White North, it's a contest in which 10 self-proposed know-it-alls competed against each other through a variety of mental events to determine who was the greatest. What I saw both pleased and disgusted me.

Disgusted because of the blatant attempts at confrontation the show splattered across the screen, from the host's loudspeaker efforts to demean the contestants to bringing back a truly detested former contestant eliminated long ago for the sole purpose of stirring up shit, it was so obvious the producers wanted confrontation. Count me amongst the minority, but this is why I detest most reality TV. If I thrived on watching people argue, I'd grab a chair at the mall and be one of those people watching couples, parents, and total strangers bitch at each other.

The Long Arm of the Law

Shh. I am the Warden and I have a hangover. Will I let that stop me from posting on my blog? Almost, so I'll keep this short.

As you may expected, work continues on Killshot and still I cannot keep my mind from wandering. Over the last couple of weeks, Killshot: Direction - the Director's guide to running the game - has forced me to reconsider many aspects of a career from the opposite side of the fence. More importantly, Evidence Points and how law enforcements conflicts with a job.

Around the same time I started popping out words up here, a friend of mine started his own projects and has released one PDF product thus far. That product, Book 'Em, had an interesting premise that's stuck with me as I've developed Evidence Points, yet this brain wonders about taking it a step further. An idea Mark had mentioned was playing a double life campaign. One night, you're the bad guys, the next finds you tracking the villains down. While the premise revolved around a modern crime campaign, it admittedly related to fantasy, sci-fi, and any other genre. Commit the crime, then create another set of characters to track your other characters down and bring them to justice.

I have a rule: if the idea doesn't fade into oblivion within a week, I must consider it. All told, it's been a couple of months at least. Not serious enough to actually consider adding anything to the schedule, but enough to place on my ever-growing list of concepts for Killshot. Having players roll up detectives or FBI agents to hunt down their wicked alternate persona and see which version wins. It's almost the ultimate PvP action for the tabletop.

Obviously, the assassins would step up to the plate first in order to determine how the detectives would follow leads and pick up on Evidence Points in the next game. And the first question I can hear is "What makes you think players would want to arrest their own characters?" I have two answers to that. First, stop yelling, I told you I have a hangover. Second, it's not exactly a career every group would sign up for, making it a perfect candidate for an issue of Killshot Files. Off the top of my head, there would have to be a reward system in place for players who stick to character and pick up the assassins' trail, something which can then translate into the assassins game. My main concern is making the detective side of the career interesting beyond simply following the path of the last game. It's a design creating more questions than answers at this point and the challenge speaks to me.

Speak to me, fair readers. Advice, counsel, share. Anything but dump.