Under the Hood Climbs to the Top

Señor Aaron at Roleplayers Chronicle posted the traffic report for his site yesterday and it seems Under the Hood, my weekly RPG mechanics/publishing column, has risen to become its most popular series. I've only seen some of the actual numbers for UTH columns and can only speculate on the remainder from there, but the mere fact that it pops up in many of the lists is very gratifying and I hope all of you enjoy everyone of them.

It's been a challenge keeping this up on a nearly weekly basis (all told, I only missed 6 weeks in 2012, including the entire month of August), but I plan to keep this sucker going for at least another year. It's been incredibly helpful in my own work as a kind of second blog with a stricter deadline to self-analyze RPG mechanics from around the industry and break down how I want them to apply in my own work. Many of the topics I wrote about during the early weeks were very influential in Killshot's designs. The trick now is pumping out new columns without stumbling over old ones.

However, that's enough time to pat myself on the back. Ironically enough, I have this week's column to finish up. (Hint: I'm talking about race mechanics this week, particularly the impoverished humans.)
Posted by Unknown @ 10:51 No comments: Links to this post

Email ThisBlogThis!Share to TwitterShare to FacebookShare to Pinterest
Labels: Roleplayer's Chronicle, Under the Hood 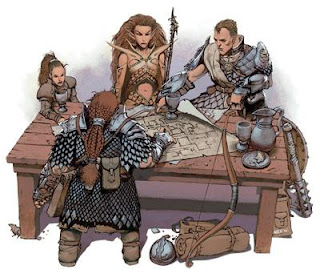 Playing with my D&D group yesterday (and doing so in person for once... always a nice touch), we were having a blast. I have to admit, though I'm not entirely sure why, this latest incarnation has me excited about D&D again. While every new playtest draft features tweaks and revisions hinting at any number of possibilities, it feels familiar and refreshingly different at the same time. I'm still in love with the advantage/disadvantage mechanic.

Then a thought occurred to me: what if Wizards of the Coast decided to go back to D&D 3rd edition? My first follow-up question wonders if it was even a consideration during those initial meetings to discuss the possibility of a new edition, but let's assume all those involved in making that call took a look at the situation and felt the best recourse was to return to what brought them so much glory in the previous decade. What if D&D and Pathfinder literally went head to head?

It's a trick question when you think about it. The idea of WotC actually re-launching 3e could create far more consequences and bad PR than anything as many would see it as "giving up" and "caving in." So there would have to be something about this effort to make it a revised edition while staying damn close to the original design of 3e. In a sense, it would be the same as Pathfinder: stick with the basics and tweak the classes, races, and such with your own personal touches. Would WotC reprint the previous rulebooks or redesign them with some minor revisions? If they were to reprint, it would likely be the whole 3.5 mess all over again and based on the fact that they seem to have learned from past mistakes (hence the whole reason for D&D Next), let's assume they simply turn back to supporting 3e again without new rulebooks or supplements for simplicity's sake.