Sex, Fantasy, and Game of Thrones 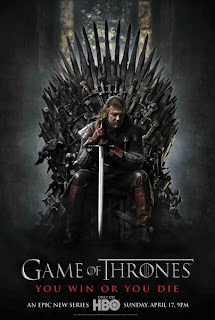 I'm a big fan of Game of Thrones on HBO. As I've never read the books (I tried, but loaned the first one out to a friend when he went into the hospital and haven't seen my copy since), I'm experiencing the show with fresh eyes. Like everyone else out there, I find it incredibly refreshing to see fantasy taken as a serious medium for storytelling, character development, and mature yet SFX-laden cinema. So everything I'm about to say is given with love and appreciation, spoken as a male member of a burgeoning household which includes a non-fantasy loving female fan.

Why the rampant sex, dudes?

Last night's 2nd season premier almost made it to the end without gratuitous sex, up until the last five minutes when we see two escorts learning their trade in school. Was it necessary? Not really, if at all. It was literally the regulatory tit shot HBO's become famous for and it's the one thing Game of Thrones has not done to improve the view on fantasy.

When I was growing up, it was impossible to find a fantasy film without T&A, thereby making it impossible for me to watch them as a kid because my parents would screen it with me. Violence was allowed, not boobies. "The violence isn't real," I was told. "Those boobs are." Dragonslayer and Krull were the only fantasy films I can remember as a kid because they weren't stopped halfway through by my mom. Having tits pop up on the screen was the standard in fantasy films and it's one of the ways, IMO, fantasy has never been taken seriously. For everything certain films, like Lord of the Rings, have done to sway opinion on the matter, fantasy remains an excuse for naked tits and sex for the sole purpose of having tits and sex.

As hypocritical as it feels to advocate against it, the sex hurts the genre. In many ways, it feels like a ploy by HBO more than a necessity to the story. If the show could go even one episode without it, I'd feel more confident in its ability to lure and maintain viewers through everything which makes it such a powerful show: story, acting, scope, all of that award-winning stuff. But as soon as an aspiring actress whose dreams of finally being taken seriously as a skilled thespian are sidetracked by the fact that she's licking her way up and down another chick enters the frame, it's an overplayed distraction when used constantly. It feels like a cheap trick, the meddlesome hand of a worried producer concerned the ratings will plummet if a woman with naturally voluptuousity doesn't jiggle her gagas in front of them camera.