I am the Warden and this has been a beautiful day!!

Actually, it's quite crappy outside, but shining like the sun indoors. Killshot's bid for funding through Kickstarter has reached 100% with just two weeks remaining and with 3 slots available for the $100 Directors reward level, there's still lots of potential for a hefty pile of cash going towards artwork on Killshot's initial release. More importantly, the backer driving this project over the finish line is none other than Rone Barton from numerous podcasts. It's kind of hard to remain humble right about now.

I'd like to take this moment to give massive thanks to everyone who's contributed so far and those yet to come. Now that Killshot has nowhere else to go but up, it's up to me to ensure it becomes everything you hope and then some.
Posted by Unknown @ 17:08 No comments:

A Preoccupation With Death 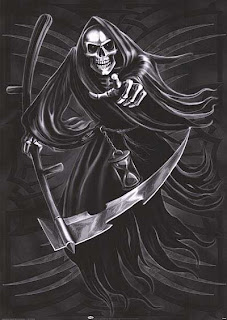 Apparently, I have a preoccupation with death. (What? The title didn't give that away?) I'm not going to get into where it came from or why that person brought it up, only to say that it came up in conversation nonetheless and with good reason. The comment - an observation, really - was a result of Killshot itself, a game centered primarily on assassins killing people as the primary objective. It didn't strike me as being overly provocative at first until that person clarified their remark.

"Considering the past year-and-a-half of your life has been confronting a near-death experience, doesn't it seem a bit ironic that you're writing about it on a near constant basis?"

The question's haunted me for the past couple of days, burrowed deep inside my consciousness to the point I haven't been able to concentrate on my work. This normally means there's a disturbing truth to it and the issue is not that I recognize it, but that I don't quite understand it. I consider myself a very insightful person, particularly when it comes to my own thoughts and emotions. Nothing slips by me and few and far between are the moments when someone else spots something I failed to catch. Not that I'm trying to brag, but all the observations brought up in recent therapy were not revealed by the therapist, but by me.

Am I only writing Killshot because of a deep seeded need to confront my issues with mortality or because my subconscious lingers on the topic so much that it leaks into my work?