Through the Video Shelves: 28 Days Later 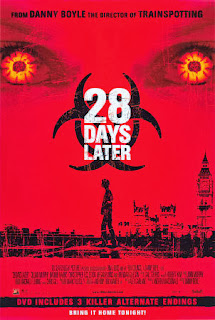 I am The Warden!!

For no particular reason, I felt like throwing on the DVD of the classic "zombie" flick, 28 Days Later. After picking it out, it dawned on me this was my first movie on the shelf. Now, when I say "my first movie," it should be clear there are some movies in our collection that are primarily for my enjoyment. For reasons, I cannot understand, my wife will not watch this movie. The only way it's going to play on any TV in this house is when the missus is studying or sleeping. So when she fell asleep on the couch last night... bingo. In fact, with her school work, this could be the start of a movie-watching marathon. Go through all my movies in alphabetical order.

Then I had another thought. My blog posts have been slipping lately. Perhaps this could be an extra project to get my ass back on the blog. It's not gaming related, that's for sure, but are we really so particular that a man writing about the cool movies inspiring his games and their designs cannot simply do so because... well, just because? I didn't think so.

I really liked it.

Thanks for joining me on this journey. Next time...

I remember catching this in theatres back in 2003 and was uncertainly fascinated by it. This was my first exposure to Danny Boyle's work, though I'm aware of his previous films (Trainspotting as the biggest example), and while that made it intriguing, I wasn't sure what to think if it as a "zombie film." My high school years were spent in worship of Romero's Dead trilogy and the idea of replicating the undead as infected victims of viral rage seemed a unique twist.

Have to admit, I did see it twice in theatres. Maybe thrice. Whatever the count, the last viewing was to check out the alternate ending shown after the credits. And this was during our Lord of the Rings calvalcade of viewing (my friends and I watched that trilogy 23 times in theatres, including the entire trilogy in a single sitting). Seeing a movie multiple times was our thing.

Watching it now, I'm struck by the knowledge of it being the first digitally shot film I'd ever seen. It shows in the early half of the film with the graininess and composition of the shots and honestly strikes me as a work-in-progress. That's not a pot shot, I'd rather shoot by the seat of my pants than storyboard a film and Danny Boyle strikes me as the same type of filmmaker.

Now that I've watched it again, ten years after it release, it's good. My opinion's the same as it was in those three theatres: neutrally happy. As for what it's done for the zombie genre and everything we have today - namely The Walking Dead - there's no mistaking how much 28 Days Later shaped modern horror.