If you've been following me Twitter feed, I've been sharing links for 4 different Kickstarters underway as we speak. Or read. Wait, I'm writing. Never mind! All four of them are on my watch list and waiting for that next cheque to make it possible to pony up just a little bit to become part of the action and help make them a reality. I'd like to take this moment to share them in a little more detail for various reasons. 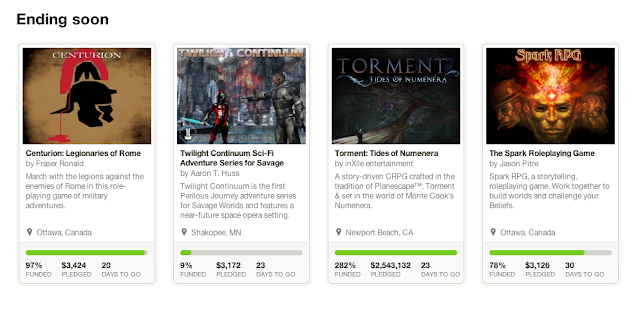 Aside from Torment: Tides of Numenera, there's a personal connection to the remaining three. Twilight Continuum you've heard about here before (I'm writing Books 2 and 5) and Centurion and Spark are projects from a local of local boys and good friends.

Centurion is inches away from hitting its mark as I write this. It's the brainchild of Fraser Ronald (Sword Noir and Kiss My Axe, Sword's Edge Publishing, and the Accidental Survivors podcast) where players take on the role of Roman Legionnaires. Fraser's a huge history nut, particularly when it comes to the Legion and it shows through in gameplay. Along with a few others, I've been helping as a playtester and watched it grow over these past few months. No existing knowledge is required as a player and if you're an interested GM but unsure of your own, there's going to be plenty of history provided to help you build a campaign.

Twilight Continuum is the ambitious 6-part adventure serial put together by Aaron Huss at Mystical Throne Entertainment. I've been part of this one for the past couple of months and put the intro video together, but she's struggling to get past 10%, let alone reach the true goal of $35,000. If you're a big space opera nut, love the sic-fi games, and want to have a complete adventure path without getting bogged down by rules expansions and third-part supplements, this project is for you.

Torment: Tides of Numenera... You know what? It's past $2.5 million. I don't think I need to share too much with you at this point. You've heard of it. And yeah, I wants to get the download edition for $20.

Spark RPG is the creation of Jason Pitre (Genesis of Legend Publishing) and will finally see the light of day after nearly four years of development. This one is also a hop, skip, and a jump away from hitting its goal and will likely rise up into something truly special. Never had a chance to play it, but the concept of creating the world around you before you create your characters sounds massively intriguing and was the basis for starting up my recent High Plains Samurai mini-campaign. Plus the artwork looks gorgeous and expensive.

That's my wish list, projects that will see my money as soon as I can do it guilt-free. Ok, maybe guilt-less. What's on your list?