The Unveiling Begins For [secret project] 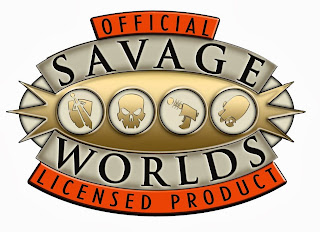 Word has come in from the publisher of [secret project] and its official announcement is coming Monday, which means I can finally get ready to start blogging about it. Not only that, showing off some prelim sketches and discussing the design process, inspirations, and breaking down the Savage Worlds mechanics to fit the zany crap that's been pouring out of me head.

That being said, Monday is still another five days away from this post's launch and posting a teaser about an announcement doesn't warrant your attention alone. So behold the following post from the Savage Insider Facebook page.


The new project's bestiary book is truly one-of-a-kind. Not only does it provide a collection of entries, each one is given a 4-page spread (6x9 layout) providing a deeper look at the entry instead of just providing a few sentences of flavor alongside a stat block. Why is it so unique? Within this particular genre, bestiaries like this are truly rare! Not only does this mean you can use the bestiary within any setting of the same or similar genre, it also means you can use these entries as allies, connections, major NPCs, plot providers, enemies, fodder, and virtually anything you can imagine.

This is actually the fourth teaser mentioned by the Insider and they've revealed a few clues about the expanse of this particular project. It's a Savage World project based on an original publication by Mystical Throne Entertainment, the publisher of Savage Insider. This release will include three volumes: a player's guide, a setting guide, and a bestiary. What I can tell you right now is that bestiary has been my baby for the past three months. I have been working on a Savage Worlds bestiary for a yet unannounced setting expansion, as well as a few other duties to come with the official announcement on January 6th.

The timing for this announcement couldn't be better as I could really use the blogging boost I get from working on any project. As I mentioned before, [secret project] has broken from my standard work habit and has been an itch I've wanted to scratch from the top of a very tall building. Soon, the relief of a good hard scratch can begin.